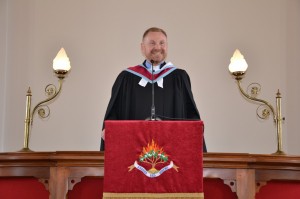 At the end of September 2016 we were delighted to welcome Rev Nigel Craig as Belmont’s seventh minister.

Nigel was born in Newtownards and raised in a `covenant’ home.

At an early age, the Holy Spirit moved in Nigel’s life, leading him to receive Christ. Nigel, along with his brothers, was nurtured in the faith at home and in the congregation of First Presbyterian Newtownards.

After reading Biblical Studies and Byzantine Studies at Queen’s University Belfast, and completing his PGCE, he served as a missionary in Transylvania, Romania, with the Overseas Board of the Presbyterian Church in Ireland (1998-2001). In partnership with the Hungarian Reformed Church (in Romania) he taught English as a foreign language and assisted the Christian Endeavour movement in their outreach to Street Kids. He met Antonia in Oradea/ Nagyvarad, and they married in 2001.

Following his training at Union Theological College, Belfast, Nigel served as Assistant Minister in Trinity Bangor. He was ordained and installed in 2007 to the pastoral oversight of Ray and Newtowncunningham Presbyterian Churches, Co. Donegal, where he ministered for 9 years. Alongside his rural parish ministry, he worked part-time as Presbyterian Chaplain of Magee College (Ulster University), Derry-Londonderry.

Nigel and Antonia enjoy spending time with family and friends, both here and in Transylvania. They also love outdoor activities (running, cycling and walking), reading and good cuisine.

We are excited for a new phase of ministry within Belmont and invite everyone to join us on any Sunday.